The Egaleo Park Campus is located within the administrative boundaries of the Municipality of Egaleo, surrounded by Streets Milou, Ag. Spyridonos, Dimitsanis and Edessis. It occupies a total area of about 60 acres. The Egaleo Park Campus includes buildings with a total area of 60,000 m2, in which some of the Departments and Administrative Services of the University are located. A total of 16 buildings have been developed within the campus to meet all needs.

The Ancient Grove Campus is located in the Municipality of Egaleo, on Str. P. Ralli and Thivon, inside the Ancient Grove area, where the famous “Walking School” of Plato as well as the St. John Church of was built in the eleventh century A.D. This church was the springboard of the “Hidden School” during the difficult years that followed the fall of Constantinople. The Ancient Olive Grove Campus extends over a total area of 100,000 m2, while the built-up area exceeds 50,000 m2. A total of 8 buildings have been developed within the campus to meet all academic and administrative needs.

Athens Campus is located northeast of the center of Athens in an urban area belonging to the Athens Municipality called Ampelokipoi, at 196 Alexandrou Ave. The official inauguration of the landmark building took place on March 16, 1931. The Athens Campus built-up area exceeds 7,000 m2.

Egaleo Park Campus is covered by a natural pine vegetation to the east. The rest of the campus includes cultivated gardens with ornamental plants, such as palm trees, roses, bougainvilleas, etc. 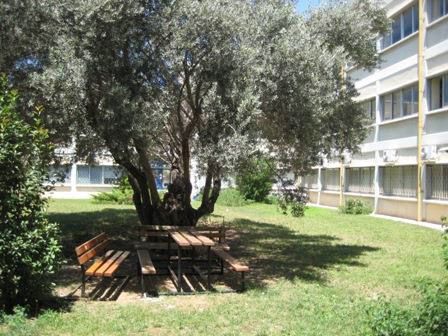 Ancient Olive Grove Campus comprises a great part of the historical Ancient Olive Grove of the City of Athens, with some sacred trees said to be dating from 480-450 BC, known as the “Golden Age “ of Pericles, the famous governor of ancient Athens. The promotion and replanting of the olive grove was part of the projects for the 2004 Olympic Games of Athens.